It seems like it was just yesterday that I set my sights on Crucial’s MX100 256GB SSD. The MX100 was a solid drive (pun intended) that performed well, was affordable, and was as reliable as a 1980s Volvo (very reliable). Crucial thinks they can build on their strengths and impress me once again with their shinier, newer, MX200 500GB SSD.

Crucial managed to carry over the same reliability claims they made with the MX100, boasting that the published endurance rating (TBW) of the 1TB Crucial MX200 SSD is 5 times greater than the average published endurance rating of three leading mainstream client SSDs (September 2014): 1TB Samsung® 840 EVO, 480GB SanDisk Extreme Pro® II, and 480GB Intel® 530 SSD.  The MX200’s MTTF is rated at 1.5 Million Hours

The marketing on the product page is simple when compared to the fireworks, flames, or graffiti you can find on some of the competitor pages.  Instead, you are greeted with the drive, some specs, and a relative minimal amount of fluff.

Get more out of your storage.

When the Crucial MX100 was released, it set a new standard for SSDs that the Crucial MX200 pushes even further. Leveraging leading specs on all fronts, along with new Dynamic Write Acceleration technology, the Crucial MX200 is loaded with innovative features and immediately increases your system’s performance.

Do more. Faster. Longer.
The Crucial MX200 delivers 550 MB/s sequential reads on both compressible and incompressible data, and outperforms a typical hard drive by 400 MB/s. Even better, the performance doesn’t let up, as the Crucial MX200 posts an endurance rating that’s up to 5 times greater than a typical client SSD.

Transfer and save large files in seconds.
Competing SSDs typically rely on a fixed cache of multi-level cell flash memory, which allows you to write sequential data at published specs, but only for so long. Our industry-leading Dynamic Write Acceleration technology solves this problem by using an adaptable pool of high speed, single-level cell flash memory for consistently fast performance that doesn’t let up.

Max out performance and increase reliability.
Our engineers created RAIN technology to protect your data at the component level, similar to how RAID is used with multiple hard drives. This technology increases the security and protection of your data to a level that’s rarely seen in consumer-class SSDs.

Encrypt and protect your data at the highest possible level.
Keep personal files and sensitive information secure from hackers and thieves with AES 256-bit encryption– the same grade used by banks and hospitals. The Crucial MX200 meets or exceeds all industry encryption standards, including Microsoft® eDrive, IEEE-1667, and TCG Opal 2.0.

Push your drive to the limit and avoid overheating.
Adaptive Thermal Protection technology enables the Crucial MX200 to dynamically adjust storage component activity based on how you’re using the drive, allowing your storage system to stay cool.

Keep your memories, photos, and files safe.
When a photo or file gets corrupted, it often becomes unusable. Prevent this from happening in the first place with the Crucial MX200, which arms every storage component with four layers of Exclusive Data Defense.

Micron® quality — a higher level of reliability.
As a brand of Micron, one of the largest flash storage manufacturers in the world, the Crucial MX200 is backed by the same quality and innovation that has produced some of the world’s most advanced memory and storage technologies. With over a thousand hours of prerelease validation testing and hundreds of SSD qualification tests, the Crucial MX200 has been thoroughly tried, tested, and proven. Make the switch to the Crucial MX200 SSD and start getting more out of your storage.

When you purchase a Crucial MX200, you are getting the drive, a spacer, and a certificate for Acronis True Image HD.  The packaging is rather simple; the box has the typical Crucial colors plastered about and the drive is neatly packed inside.  There are no frills…

The drive spacer serves to provide additional height, bringing the total height of the drive and spacer to a standard 9.5mm.  Some installations require specific drive heights for a true fit and the spacer fills this gap.

When examining the features and design of the MX200, Crucial departed only slightly from their MX100.  The drive is made from the same materials but instead of the shell being screwed together, it uses nubs.  It was incredibly annoying when trying to open the drive.  When considering this design, I can only assume that it will cut down on assembly time, decreasing the cost of producing the drives.

When opened, the drives internals reveal eight NAND packages, the controller, and some DRAM.  Crucial has outfitted the MX200 500GB version with a Micron 88ss9189 controller.  This controller is identical to that of the MX100.  The Marvell 88SS9189 controller supports high-speed NAND flash interfaces up to 200MB/s per channel and integrates a dual-core Marvell 88FR102 V5 CPU with shared DTCM and ITCM SRAM. It can support up to eight NAND flash channels, ~500MBps sequential write performance, as well as EPP and T10 CRC Checks. 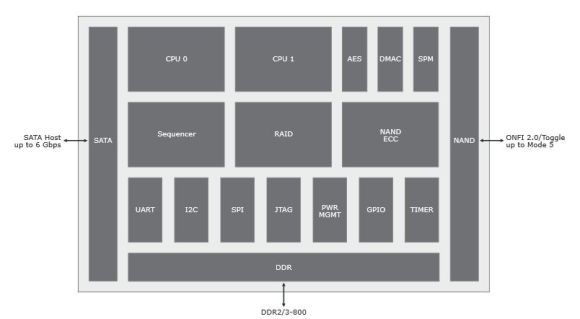 I have always had a passion for everything computing. In early 2000, I decided to take my passion to the web. Thus, C.O.D. was born. Through the years we have made many great friends at C.O.D. and hope to continue our journey for years to come.
@computingond
Previous Fix Could not find file During Set up Client Restore Service Setup
Next ASUSTOR AS5008T Review

A Closer Look at Samsung RAPID

Some companies just have a knack for making their way into my life. My home and offices are populated with plenty of Samsung tech; I have a Samsung microwave, LED TV, Soundbar, Galaxy S3, headphones, Color Laser Printer, 2 Samsung Laptops, etc. Well, now Samsung wants to entice me with their 840 PRO Series SSD. Does Samsung's high end SSD have what it takes to unseat our current SSD choice, the OCZ Vector?

An affordable drive with impressive longevity.

Shop Now
User Rating: Be the first one !

Show Us Some Love